However, Porches, a staple in the “sadboy” music genre, wasn’t always recognized for his depressing music that makes you want to dance. Maine began making music under that name in 2010, after his first band “Space Ghosts Cowboys”, disbanded after doing a regional tour. Like most artists, he began making music from his home, located in Pleasantville, NY, after buying a Casio CA-110 keyboard. After a year of making songs with his keyboard from four track recordings, he released 3 EPs in 2011. The following year, he was able to release a full-length record, “Slow Dance in The Cosmos”,  on the label Exploding in Sound in 2012. After playing shows in the NYC area for a few years, he signed to Domino Records in 2015, with a sophomore album, “Pool” following in 2016. This album began as a home project for Maine, but was developed into a well produced album with mixing done by Chris Coady (Beach House), and featured guest vocals from Greta Kline (Frankie Cosmos).

The House starts off on an upbeat note which is the beginning of the misleading mood that this album sets. “Leave The House” and “Find Me” are great intros to the album. They tell us a little about Maine’s uncertainty in life through a combination of synthy melodies and ambiguous lyrics. In “Find me” the lyrics are “Think I’ll go /Somewhere else /Where I can sink/  Into myself” along with “I can’t let it find me” repeated throughout the song, and are rumored to be about anxiety attacks that Maine have experienced. The imagery in the music video for “Find Me” shows Maine exploring what seems to be his hometown, surrounded by children playing outside in old clothes with skinned knees. The video seems to be an introspective lens into his life growing up  in Pleasantville NY.

“Understanding” a song written and recorded by the father of Porches, Peter Maine, acts as a interlude. Essentially a stripped down poem, Aaron took a recording of his father singing and arranged chords to compliment his voice. It’s a great juxtaposition to the synth heavy tracks that precede and follow it.

“Country”, is the first single, and the last song Maine wrote for the album. He says he felt extreme amounts of optimism when writing this song, and in the context of the album, it’s a song about rebirth while he thinks of the other songs  as concluding chapters of a book. The song is pretty short and the lyrics are hard to make sense of. The music video was filmed in the lush Upstate NY, where the bombastic aerial shots display Maine in the “country” where he secluded himself before moving into the big city.

“By My Side” is a pretty R&B song that serves as a pleasant shift in sound, and also as a halfway point in the album. With pretty straightforward lyrics, and more bass than synths, this track manages to stand out on this indie electronic album.  “Åkeren” is  a  poem sang  over a shimmery electronic backing accompanied by obscure background vocals. It’s recited in Norwegian by Okay Kaya. One of the stronger tracks on the album is “Anymore”. We don’t get much from its vague lyrics, but this song is about letting things go. This is one of my favorite Porches songs, and the instrumentation of it is reminiscent of Tears for Fears and other New Wave artists.

Sadly, it seems the album takes a downward spiral in the final few tracks. Please take note of the image below, –a disgruntled Aaron Maine in jury duty. This photo from 2015 accurately sums up how I feel about the rest of the album. Many of the songs aren’t memorable and can, in fact, become a nuisance.  “Wobble” is a sad song about someone that is missing. When I hear the song “Goodbye” I imagine myself crying In a club dancing alone, surrounded by strangers.  “Swimmer” is another song on the album with overly auto tuned vocals that don’t quite harmonize well with the instrumentation. “W Longing” seems to be a song about nearly drowning. “Ono” sounds like 3 minutes and 40 seconds of whining because the chorus is just Maine saying “oh no” over and over again, hence the title. The final track “Anything U want” mentions the characters from the Norwegian poem, Julie and Ricky, but they seem to be separated for some reason. As a narrative I appreciate this song, and in a cinematic way, they say “I love you” to each other, but then the album just ends. 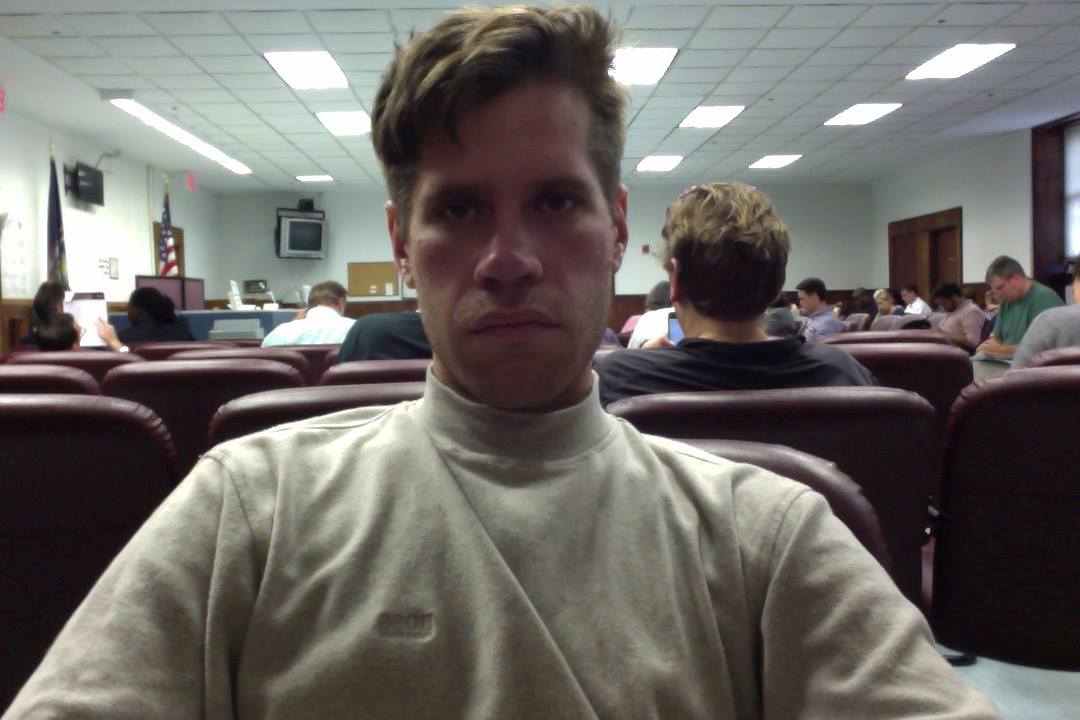 The House is definitely an album worth giving a listen to. It’s not my favorite Porches album, but it’s an artistic follow up to his last album, and I think  the collaborations on this album add a personal touch to the electronic music that we’re used to. I will say that I’m sad that mundane songs like “Car”, a poppy single from his previous album, are what attracted me to Porches’ music,  however personal growth in art is always a good thing, and I support his creative decisions in that regard wholeheartedly.